In V's Shadow Gallery the Vincent van Gogh painting The Church at Auvers can be seen in the background.
Posted by David at 1:30 PM No comments:

How Do People Sleep at Night? 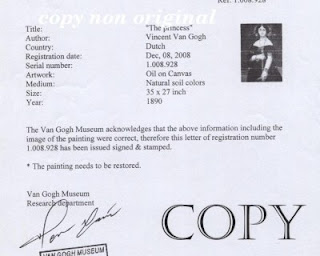 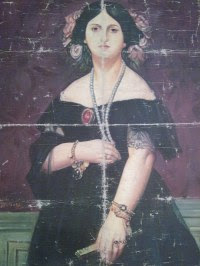 A friend of mine had a painting of Van Gogh which is not in your list but has been Authenticated by Van Gogh Museum Research Department on Dec 08, 2008 titled as "The Princess" with registration no. 1.008.928. If u are interested i can give further information about that. Pls let me know.

This, of course, sounded suspicious, but I nevertheless invited the writer to send me images which I attach to this blog posting.

Over more than 15 years on working on my Van Gogh Gallery website I've received a number of e-mails like this. But this one was especially striking in terms of its stupidity (it's obviously not a Van Gogh--more likely a copy of a painting by Ingres). And the clumsiness of the certificate of "authenticity" boggles the mind.

The writer, of course, wanted help in selling this treasure. I sent him packing. What sort of people do this kind of thing? Nigerian e-mail spammers, dishonest roofers that tell the frail old lady that her (perfectly sound) roof is in immediate need of repair . . . . or people trying to sell flea market garbage as genuine art works.

Anyone with an ounce of common sense would never be taken in by such amateurish deception. All the same, I think it's a good idea that people were made aware of these sorts of deceitful tactics.

Caveat emptor!
Posted by David at 12:38 PM No comments:

In June 2010 the BBC aired an episode of the science fiction series Doctor Who entitled "Vincent and the Doctor." In it the time traveler and his companion travel back to France and meet Vincent van Gogh.

As a long time Doctor Who and Van Gogh aficionado I was very much looking forward to this episode. Normally I wait until Doctor Who comes out on DVD before I watch it. Mainly because the CBC, which airs Doctor Who in Canada, is forever cutting the show up, moving it, postponing it, etc. I couldn't stand it anymore. When I saw that the Van Gogh episode of Doctor Who was airing here in Canada I decided to make an exception and watch that one single episode before the DVD set comes out.

So the whole thing was a bit jarring for me because suddenly I was faced with a new Doctor (Matt Smith), a new companion (Karen Gillan), a new credits sequence and a new TARDIS. A lot to take in. But never mind.

As for the episode, overall I was disappointed. I'm definitely not a stickler for historical accuracy, but the errors were unnecessary and easily fixed. The Van Gogh specialist at the Musée d’Orsay (played by the always enjoyable Bill Nighy) says that Van Gogh died in 1891. He died in 1890. Most of the episode takes place in an unnamed French town which is both Arles (1888) and Auvers-sur-Oise (1890). I realize that the episode writer Richard Curtis (of Blackadder fame) included the Auvers setting because he wanted to use the church as a plot device (and that church was painted in 1890). But he easily could have set the whole thing in Arles and altered the story accordingly (was the plot really so dependent on a painted smear of a monster peeking out from the church's window?).

Which gets to the story. There's plenty of material to deal with when a 900 year old alien time lord travels to the 1800s to meet Vincent van Gogh. But much of this potential was untapped. I appreciate that this is a science fiction program (that has seen Agatha Christie in the same room as a giant wasp and both Shakespeare and Dickens confronting alien witches/zombies). But the best they could come up with is Vincent van Gogh battling a giant invisible chicken?

"Vincent and the Doctor" did have some strong points, however. The actor playing Van Gogh, Tony Curran, did a good job, even if his Scottish accent was a bit too Groundskeeper Willyesque. There's a strong physical resemblance and Curran's handling of Van Gogh's manic moments was well done. The set designers also did a very nice job in reproducing the Café Terrace and Van Gogh’s bedroom (if only they’d spent a few more pounds and digitally recreated the Yellow House, rather than having Van Gogh living in a sort of barn). And the ending, back in Paris in 2010 is touching and well understated.

With a few story tweaks here and there this episode of Doctor Who could have been outstanding. All in all it was adequate. And, of course, to see Vincent van Gogh standing in the console room of the TARDIS . . . . . well, that alone was worth it.
Posted by David at 11:52 AM No comments:

The Vincent van Gogh Gallery has been online for nearly fifteen years now. Recently I decided that adding a blog would be a good idea.

I'm pleased with the Van Gogh Gallery website, but I thought that it would benefit from some content that was a bit more subjective and informal. So a blog seemed to be just the thing.

Here I'll be posting my thoughts on Van Gogh and his works, on Van Gogh in popular culture, books and films, etc., etc. Really just a mixed bag of thoughts, gripes, musings and reflections.

I welcome any comments or suggestions for future postings.
Posted by David at 8:41 AM 1 comment: